This was a massive four days of big brains in small rooms, intense and challenging dialogue, here’s the full program and catalogue, I filled my note book and have a series of posts to cover highlights, cool papers and where to now… 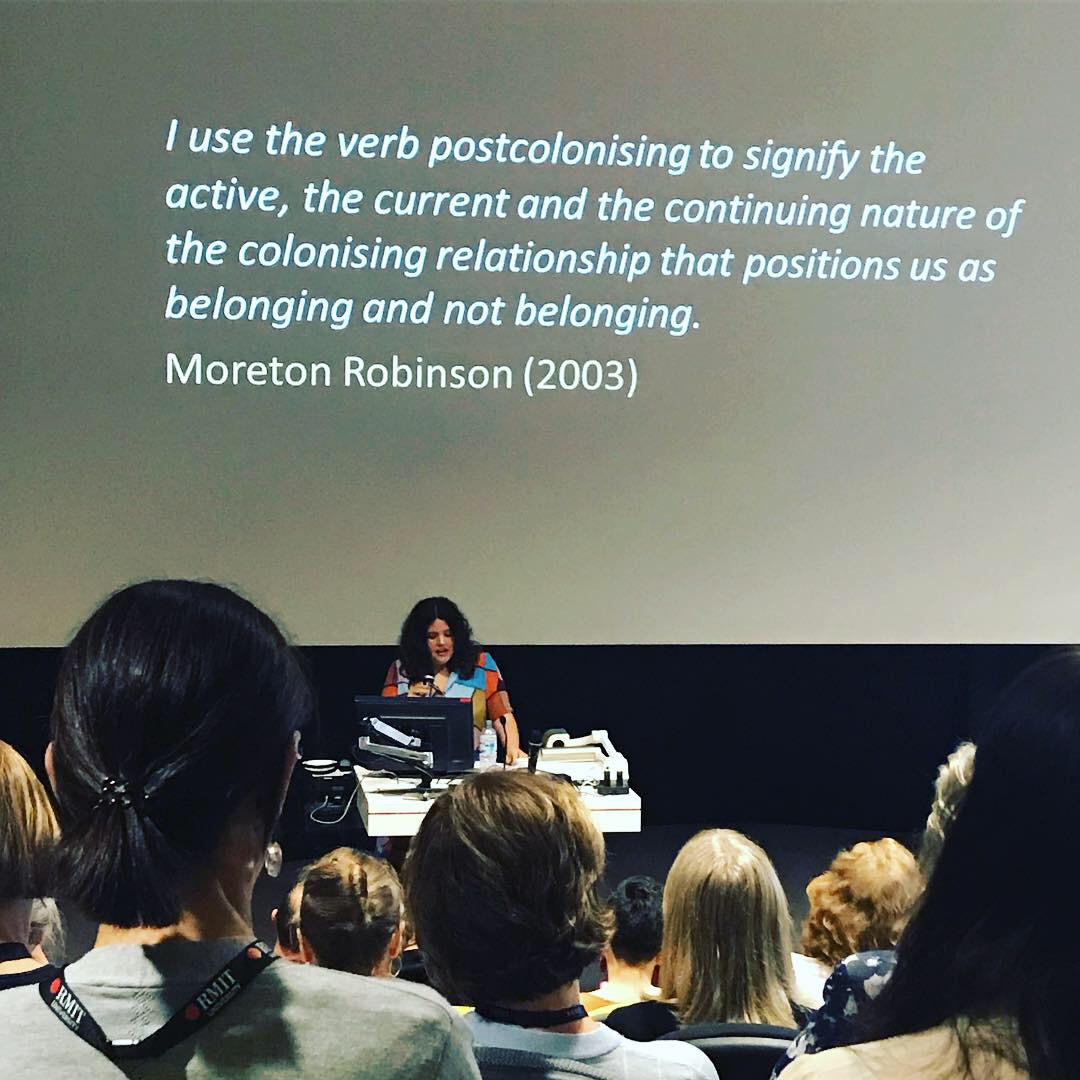 “The intersection of art and society is where differing world views and opposing epistemologies can meet and clash. Art offers a site for modelling political alternatives, questioning dominant discourses, and producing new historical narratives. Responding to the political, economic and environmental tensions of the present moment, the conference explores the relationship of the arts to social life throughout history. Located in a region marked by multiple and overlapping colonial and postcolonial histories and contemporary processes of globalisation, the conference aims to initiate critical dialogues that foreground the complex contexts, diverse practices, multiple histories, and contested trajectories of art.”

Establishing a culture of safety and good intention with a moving Welcome to country we were reminded of our responsibility as custodians of knowledge and as cultural producers to share stories, maintain our differences, celebrate our commonalities and shared purpose. We were encouraged to find our own connection to country, to know where we have come from, learn and remember our family, our place. That this is a deeply de-colonising act, to connect ourselves to place and people, and to remember to care. Care was a theme that emerged from the papers I attended and the discussions that were tabled.

Throughout Australia, arts and cultural organisations and institutions are attempting to transform their practice and their spaces to acknowledge and redress the trauma and injustice central to the nation’s history and contemporary reality. There is a growing awareness of and movement away from colonising frameworks with the aim of decolonising and/or Indigenising the sector. These transformations range from the development of Reconciliation Action Plans, inclusion of Indigenous content, recruitment of Indigenous staff to the creation of advisory bodies. There is a sense, among many, that the inclusion of First Peoples is a necessary step for the progressive organisation or institution. However, shifting focus in such a radical way can be a difficult process for spaces that have historically excluded our bodies and our expression of power. It is also difficult for these actions, however benign in intent, to move beyond mere acts of tokenism that create the impression of inclusive and progressive spaces without the necessary substance.

This paper explores this movement and the transformation of one entity, Museums Victoria, from a space that objectified and excluded Indigenous knowledge and bodies to an institution that aims to place First Peoples first. This shift of power within the Museum follows the success of the ‘First Peoples’ exhibition (2013) that privileges and centres community voices and was created in partnership with communities, heralding a new era of collaboration, empowerment and self determination.

Genevieve Grieves is Worimi – traditionally from mid north coast New South Wales – and has lived on Kulin country in Melbourne for many years. She is an educator, curator, filmmaker, artist and oral historian who has accumulated nearly twenty years’ experience in the arts and culture industries. Some of her projects include the documentary, Lani’s Story; the video installation, Picturing the Old People; and, she was the Lead Curator of the internationally award-winning ‘First Peoples’ exhibition at the Melbourne Museum. Genevieve has a role as a public intellectual and speaker and is undertaking her PhD.

Notes from the paper…

There was some unpacking to do after the welcome to county; in part for the visitors and others who may not understand the significance or function in the current social – political climate.

The terms indigenising and decolonising were examined, ‘indigenising’; locating the indigenous in the centre, was preferred to the term ‘decolonising’; which continues to centre the the colonial in the ongoing conversation. With the encouragement that through arts and culture we can all play a role in disrupting the structure of colonisation, making it a space to shift power dynamics and critique th establishment. This is a theme that would inhabit all the key note papers, and many of the other presentations over the course of the conference.

Grieves describes her process working on the ‘First Peoples’ exhibition…With regards to the arts and culture, the process of indigenising is located in community; in spaces where people come together for projects, sharing of knowledge, incorporating indigenous ways of doing, and that this process being led by first peoples was highlighted as key to real change and significant in creating this exhibition. It’s not just about representation, and who is seen, rather who is has decision making power, who decides which stories, and which objects are used in a museum context. For real cultural integrity, elders came together with the museum which allowed for deep engagement, Grieves notes that connection is a deeply decolonising act.

Cultural institutions such as museums have a responsibility and are a platform for sharing difficult stories, and creating a space for communities to listen to difficult aspects of our shared history. That the process of creating a exhibition with a community is as important as the end result, that each person needs to know their own story, their own position, recognise privilege, be prepared to risk hurt, make mistakes and learn alongside others.

There was some discussion around the way that museums traditionally take away from the living world, classifying and objectifying rather than presenting objects and stories of a living culture. That it is possible to work with the contradictions of museum spaces, that it is possible to transform and challenge the traditional ways they operate and make them serve the communities they exist in.