Reading and reflection after the Winter Seminar…

It was in the days just prior to my assessment I made the decision to perform Keep Care along with my installation, and followed it up with the full performance at DEMO. It felt like the work called for this, and the results and some reactions were interesting. More later.

Stepping into that space, I have been looking more into artists who use performance in their work, specifically Yoko Ono, after reading about Cut Piece:

I’m pretty much in awe of her work, especially in the 60s.

Morning Piece consisted of pieces of broken glass found on the beach with the dates of future and past mornings glued to them. Yoko held events on the roof of her loft in new York where she sold these mornings at a very different prices.

Dick Aunspaugh recalls: “On the morning of September 12, 1965, Meredith Monk and I went to the roof top of 87 Christopher St , New York City to see the sunrise and attend an “event” created by Yoko Ono. There were a number of folks gathered there that morning. Yoko had a large gridded off board labeled with “Mornings” and each was represented with a shell, pebble, a piece of sea glass or other small object.

The “Mornings” were labeled with dates going far back in the past and far into the future… there were Egyptian Mornings, Maya Mornings, Renaissance Mornings ( You get the idea) as well as Morning such as June 18, 2176 (etc)…and they were All for Sale. Prices ranged from a few cents to thousands of dollars $$$$. I wanted to purchase an “Egyptian Morning” and the cost was several thousand dollars. I asked Yoko if it is in the “past” How could I enjoy it if I bought it? She said time is curved and that time will come around again. I told her I only had a $1.25 in my pockets at the time. She said I could make a down payment on that morning and pay her the rest when “My Day” rolled around again in time. So I gave her a $1.25 and became an owner of a beautiful ancient Egyptian Morning. I still owe Yoko several thousand dollars.” 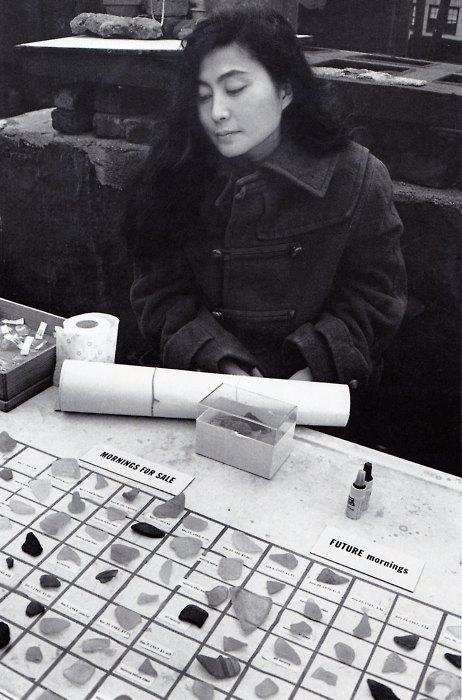